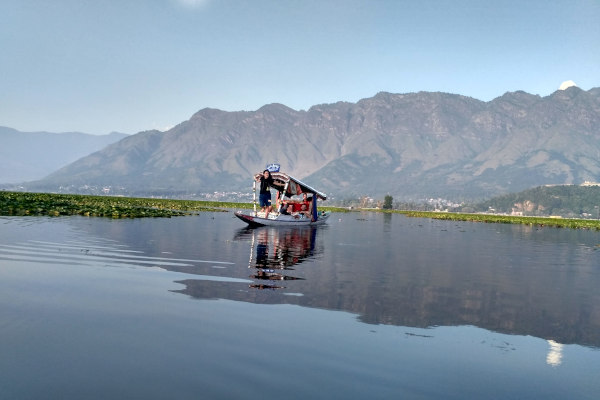 Dal lake Srinagar often referred to as the “jewel in the crown of Kashmir” is world-famous and integral to tourism and recreation in Kashmir.

Visitors can enjoy a stay inside the Dal Lake in Kashmir’s, indigenous houseboats made of cedarwood, having intricately carved wood paneling. For many tourists, the charm of staying on a houseboat is enough to drive them to the valley. 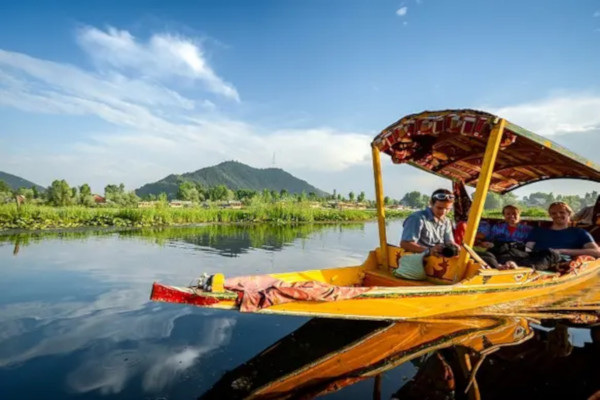 Early mornings, a visitor to the Dal Lake can enjoy a ride in a colorful Shikara through the Lake’s floating gardens.

Known as “Rad” in Kashmiri. Where the Lake dwellers sell fresh vegetables at throwaway prices.

The floating gardens blossom with Lotus flowers during July and August.

The Lake’s 15.5 Km shoreline is encompassed by a boulevard (or the boat road) and is lined with Mughal gardens including Nishat Bagh and Shalimar Bagh built by the Mughal emperor Jahangir.

Dal lake has been a boon for the development of tourism from the valley and the state. At Dal Gate, a gate lets out the lake water to prevent it from floods.

Char chinar island in the middle of the second portion of the Dal lake has been a favorite place of emperors and empresses and later it attracted famous foreign writers/visitors like Bernier, Forster, Moorcroft, Vigne, and many other travelers.

Sona Lank “golden isle”. At the south end in the third portion of the lake was raised by Sultan Zain-ul-Abidin in 1421 AD for the shelter of the boatmen in Bod Dal (Big Dal). He built a three-storeyed house on the island which was destroyed by the earthquake.

Emperor Jahangir also built a cottage there, which also got vanished. It was rebuilt by Afghan governor Amir Khan Jawansher (1770-76). Nehru Park is an island just a few yards away from the roadside near Shankar Acharya hill.

Word Dal in Kashmir means a lake, in Tibetan Dal, means still. According to a Hindu belief, the area is said to have been an extensive plain called Vitala-marg. Which was converted into the lake by an ancient raja?

Over the years the size of the lake has shrunk to a large extent. Due to environmental changes and population growth. Protection measure to save the Dal lake from further hazards has been the prime concern of the authorities and people connected with the tourism industry in particular.

Water skiing is the favorite sport among tourists during summer. Motor launches with ski boards are available for hire. Shikaras are the favorite ride of the visitors.

During the winter season, migratory birds float in the lake making it a magnificent scene.

The Dal Lake offers splendid colors and moods with every change in the weather that mesmerizes the visitors and offers the ultimate shot to a photographer.